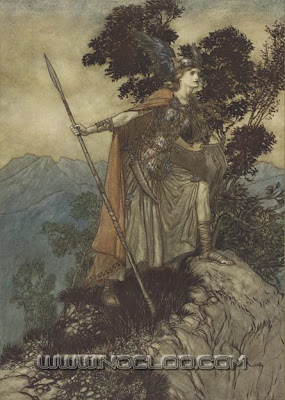 It took me forever to find the name of the artist for this wonderful illustration. It's by Arthur Rackham, an influential illustrator around the turn of the century, who I should have learned about in school but instead learned about "real" artists and how to make mosaics.
Here's what ticks me off. There are some great books out there that have hundreds of illustrations in them. Yet there are no credits given to the artists. The book I found this pic in had not credits, but acknowledgements. This means the photo or art service. This is a disservice to the illustrator and the reader. It is also, in my opinion, an immoral industry to supply photos of works of art in the category of, essentially, clip art.
Anyways, it took a while but I found it, and discovered that Arthur Rackham was an incredibly talented and prolific illustrator. He illustrated several classic books such as Wind in the Willows, worked with Barry on some Peter Pan books, and there is a website with scores of his illustrations, but I won't put the link up because all it is is an attempt to sell prints and mugs and postcards of his art. Wouldn't he love that? How can someone with no talent themselves stoop to going around pulling bad reproductions of public domain work and make a business out of selling bad prints and matchbooks of the art? (notice the watermark on the Valkyrie illo.)
On the other hand, I'm no big proponent of what modern corporations are doing to keep their properties from falling into the public domain (like Superman), by having copyright laws changed that don't really help creators, just corporations... and "re-creating" characters so that they can legally call them new properties (like killing Superman and bringing him back... a shallow attempt to create a new property from an old one just when the copyright and trademark end was looming near.)
All the corporations, and even some art reps, were sending lobbyists to Washington to fight the Freelance Writers and Artists Protection Act, which would have removed us from anti-trust laws which disallow us from negotiating prices and terms as a group against media giants. It would be nice to have some laws concerning art and writing that actually are in the interest of artists and writers. Making Work for Hire illegal would be a good first step! And how about giving credit to all artists, whether living or dead.
The reason the Laws concerning art are important is because that affects the public attitude toward art.
Posted by Ted Dawson