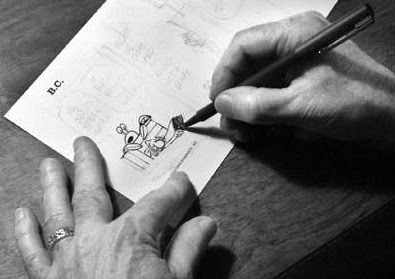 Johnny Hart, creator of the comic strip B.C., passed away on Saturday.

In a 1980 interview with Jud Hurd in Cartoonist PROfiles, Johnny said:
"...'cartoony' and 'simplicity' became very important words to me, and I extended them into every phase of what I do..."

And the result was some of the most beautiful linework ever to hit the comics pages. Johnny's work was simply amazing. His linework was sparce, but very expressive.
Simplicity has the illusion of looking easy. It's not. Try drawing a B.C. character with the expressiveness Johnny Hart could achieve with such few lines. It's not easy.

In the above story, Johnny's wife said he died at his drawing board.
There is something bittersweet about that.
Posted by Stacy Curtis