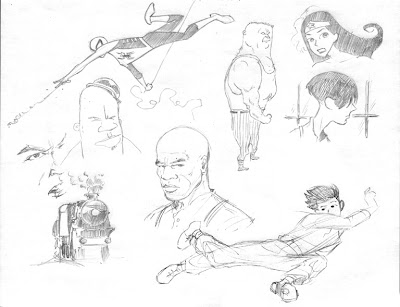 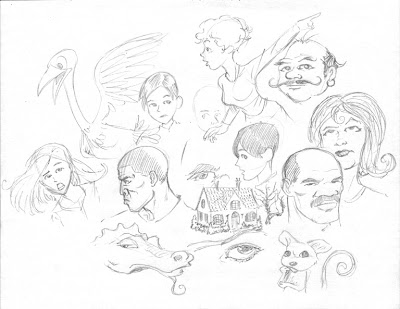 Some warm-up sketches from this weekend.
Posted by Ted Dawson 2 comments

I can't get enough of Roy Crane's work. Actually, I can't get any. When is someone going to publish a nice hardback of The Complete Captain Easy or Buzz Sawyer? 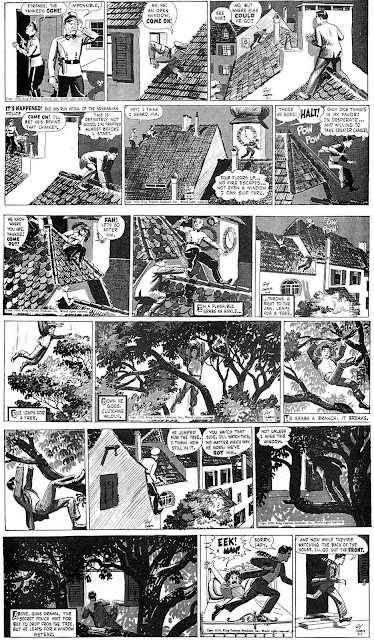 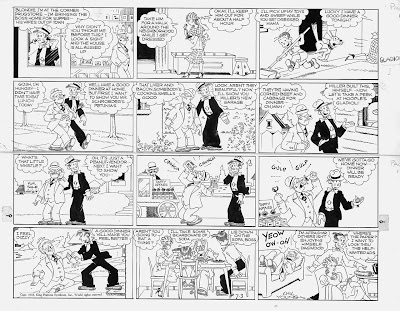 I might be the only person who goes ga-ga over original comic strip art, but here is some more. This sequence of Nancy strips starts with creator Ernie Bushmiller and ends with current cartoonist Guy Gilchrist. Click to supersize and see the details. 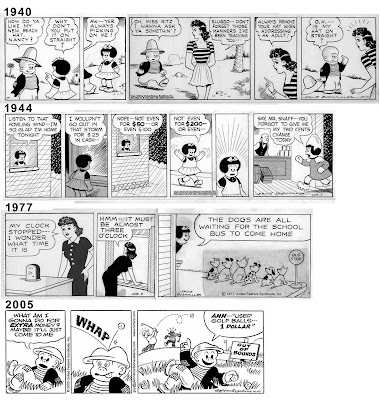 EM: This is the Dr. Seuss “If I Ran the Circus” question: If you were running a newspaper chain or comics syndicate, what risks would you be taking? What do you think the industry ought to be doing that they’re not?

DA: If I were running a syndicate, I’d add more alternative-type comics and keep only the best “legacy” comics (which, as many cartooning fans know, are those comics whose original creator is dead – often long dead). The fewer “legacy” comics, the more slots there would be for talented creators trying to break into the business. I think a syndicate should have a mix of all types of comics, but, in general, the current mix is too tame and not modern enough to attract enough of the young-adult readers needed by daily newspapers.

And if I were running a newspaper chain, I’d publish dozens of comics in each of the chain’s papers, have a staff editorial cartoonist at each paper, and let reporters do livelier writing. I’d also settle for a smaller company profit and smaller executive salaries in order to pay for those dozens of comics, pay for those staff editorial cartoonists, and not lay off reporters. Obviously, no corporate-type person would let me run a newspaper chain in real life! 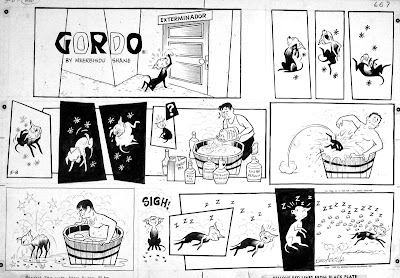 Arizona native Gus Arriola was one of the true innovators of the Sunday comic strip. You can see from these original strips that Thinking Outside the Box was the natural way his brain worked. 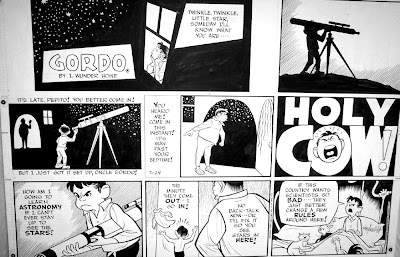 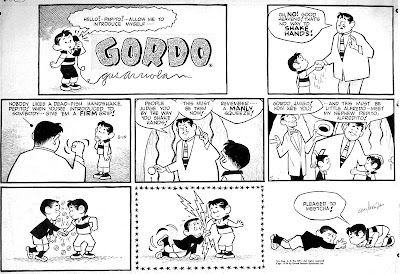 Arriola worked as an animator on Tom and Jerry cartoons before starting up his own strip, Gordo. Like Sparky Schulz, Gus Arriola was the sole writer and artist for his comic strip. 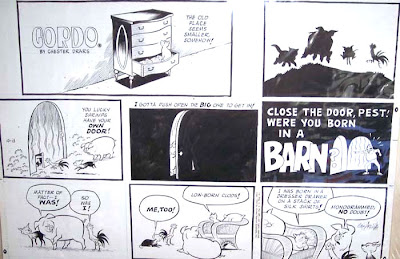 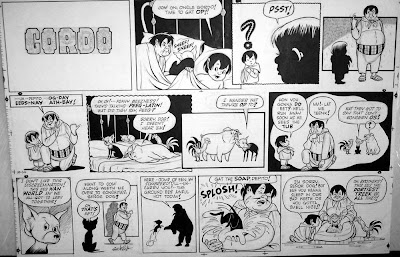 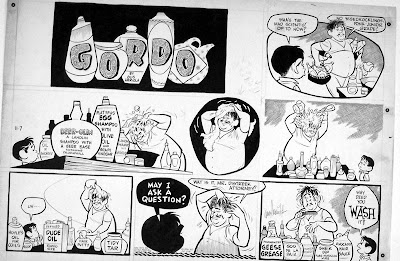 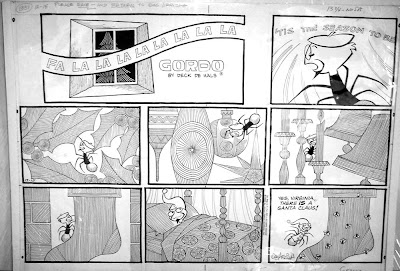 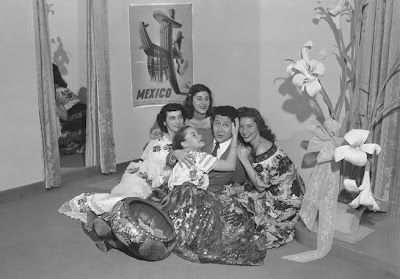 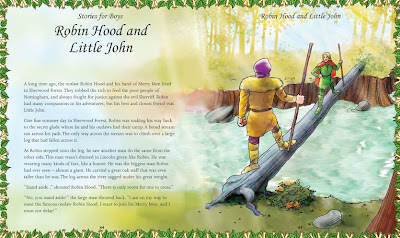 Not my best work, but an experimental page spread done in Photoshop.
Posted by Ted Dawson 2 comments

Here are a couple of fun Family Circus originals by Bil Keane. Click to Supersize. 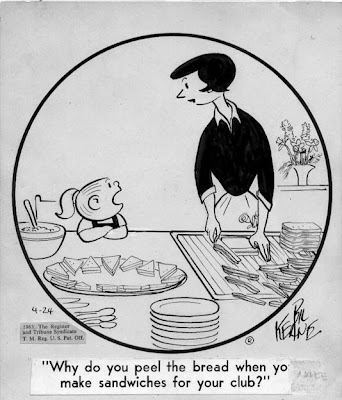 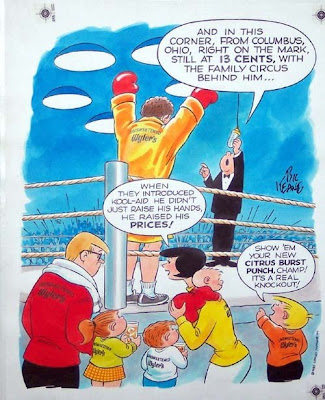 There's something about this Pogo strip that I just love. The writing, drawing, inking and lettering are just about perfect. 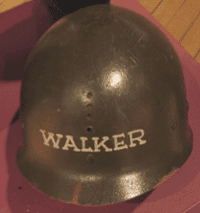 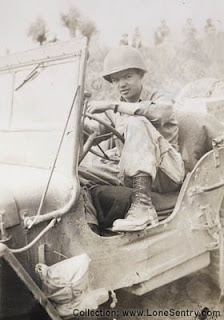 The so-called military VIP list was obtained under access to public records laws and may be downloaded as a PDF document by clicking here.  Copies of military service records for individuals on the list may be requested under the Freedom of Information Act from the National Personnel Records Center, Military Personnel Records, 9700 Page Ave., St. Louis, MO 63152-5100. Requests may also be faxed to (314) 801-9195. 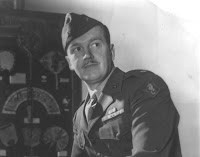 Requests should mention that they’re being made under the Freedom of Information Act. Requests for records of deceased individuals will usually result in more material than those of the living. 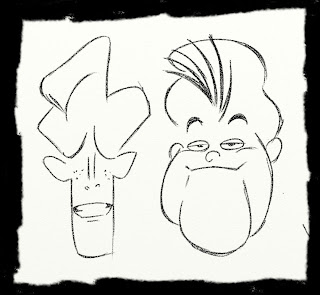 I ran across this interesting batch of artwork for a comic strip called Annie's Li'l Orphans, by Stan Drake (Juliet Jones, Blondie) and Bill Yates (Professor Phumble, King Features editor). It looks like Drake did what he did best -- draw pretty girls -- and Yates drew the funny figures.

I don't have any information on this strip. I don't know if it saw syndication, but I'm guessing not. Still, it's a rare treat to get a peek at Drake's pencils and inks up close (click the pics to supersize).

Edit: I discovered what appear to the the rest of the original strips that were part of the proposal to the syndicate. I've added them to this post. -- Ted 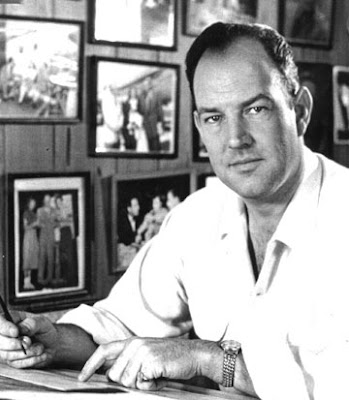