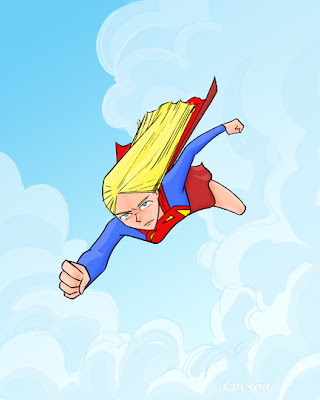 This drawing and the preceding ones are part of an effort to update the ol' portfolio with illustrations of older kids. I don't know if this pic of Supergirl is manga necessarily, but it has a hint of it.
Manga seems to be mostly in the eyes. I've seen stuff that is supposedly manga but is nothing more than the usual superhero stuff with big eyes that seem out of place. The only other strong visual characteristic of manga I can identify is Catholic school mini-skirts.
There is a strong, important stylistic aspect of manga that seems to originate with Osamu Tezuka's Astro Boy, which I was familiar with as a kid back in the seventies. There's a nice dynamic of foreshortening, line economy, and the odd melding of cutesiness with semi-realistic violence. When done well it works great. I would like to see more originality in style, though, than copycatting.
Posted by Ted Dawson