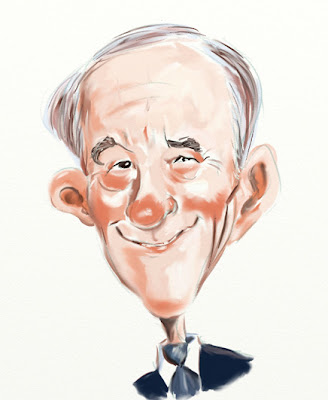 Is Republican Presidential Candidate Ron Paul the Defender of the Constitution, or the Delusion of the Constituency? The Shadow Libertarian brings soft punches to the ring but lands them squarely on the nose each time. If Ron Paul fails to come through in the primaries, will he run independently and become the Republican Party's Ralph Nader? Will Ron Paul be the Wild Card in the 2008 Presidential Election or just a Crazy Eight?

The first in a series of Presidential Candidate Caricatures and Profiles, brought to you by the Not-for-Profit Apolitical Inaction Committee, Three Men in a Tub of Righteousness.
Posted by Ted Dawson