Elephant in a Tree

What is it about this sketch that makes people want to permanently make it part of their body? 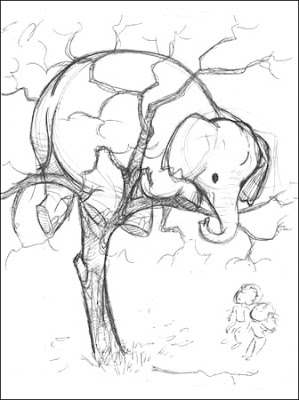 Several months ago, I somehow ran across the Flickr page of Dave Navarro, formerly of Red Hot Chili Peppers and current lead guitarist of Jane's Addiction. Apparently he had the image tattooed on himself and his daughter. I thought it was unusual but I was flattered.
Yesterday I read the comments on that blog entry. A couple of other people said they wanted the tattoo as well. I'm cool with that. I'm just wondering what it is about this drawing that makes folks want to wear it? Is it Freudian?
Originally this was a doodle for a picture book idea I had after telling my kids a bedtime story. Maybe it's an omen of sorts, telling me I need to go ahead and do that book. Or become a tattoo artist.
That's the problem with omens. They're always so vague.
Posted by Ted Dawson