There is a very cool interview with one of my favorite authors, Michael Chabon, over at Newarama.

I first discovered Michael Chabon about ten years ago when I read his novel The Amazing Adventures of Kavalier & Clay. Chabon hadn't yet won a Pulitzer Prize for his book (or probably even received his first royalty check), and I was actually able to go to his website and swap e-mails with him. Can you remember when e-mail and the web were still fairly new, and everybody was accessible by e-mail?) A few months later, that was impossible. He became Rich and Famous. He also went on to write some comic books and a screenplay for Spider-Man 2. 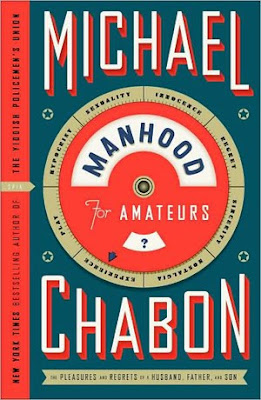 The interview is a fun read. He discusses his new book, Manhood for Amateurs: The Pleasures and Regrets of a Husband, Father, and Son. I enjoyed seeing another dad talk so much about his kids and what is out there for kids to read today. (There's a nice mention of Owly and picture book authors such as David Wiesner and James Joyce.)

Chabon: Well, of course the Philip Pullman trilogy, if you can call that current. You can also argue whether that’s a children’s book, but it might back up what I’m talking about, because my daughter did read it when she was very much a kid, and loved it, and I loved it too. It’s probably the work for children that I’ve most loved since I was a child myself.

Other stuff that’s out there now? Well, there’s beautiful things happening in the world of picture books. Brian Selznick, who did The Invention of Hugo Cabret, and David Wiesner, who did Tuesday, they are both amazing. William Joyce is a genius, and that stuff wasn’t around when I was a kid. But a lot of the things I read to my kids are also things I read when I was a kid.

Nrama: To attempt to tie this together – sometimes I find that in those works aimed at children, there’s these references to literature, or film, and they lead me to seek those works out for myself.

Chabon: Exactly. I leaned a lot reading comic books, and from the many allusions by Stan Lee in the Marvel books, and the way the DC writers would drop a lot of kind of fancy words into their scripts now and then that would send me to the dictionary, and from there to make many more literary discoveries. What great stuff.

Read the full interview at Newsarama.
Posted by Ted Dawson