When I was painting a pic of Wonder Woman a couple days ago, after reading about DC's plan to redesign her costume once again, I had a thought. Maybe there's nothing wrong with Wonder Woman's costume. Maybe what's wrong is the way it's drawn.

Is this how Wonder Woman should be drawn? 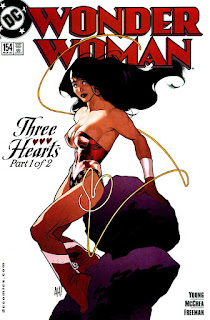 This is basically the same costume. What's different? 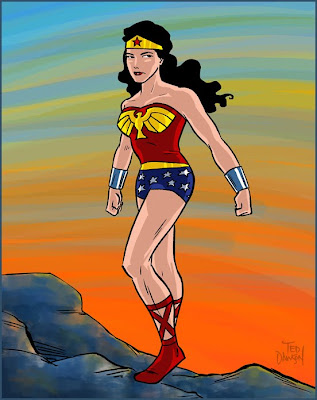 The way Wonder Woman is drawn in comic books has changed drastically since comic books aren't bought by kids anymore. All I know is, if my wife was Wonder Woman (and she's pretty close), she wouldn't be posing for covers like this: 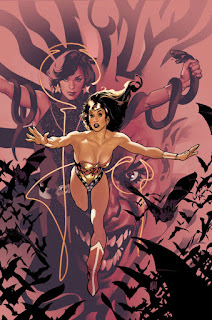 And if there wasn't some Grand Conspiracy to keep comic books away from places where kids can actually buy them, maybe even this would be an improvement: 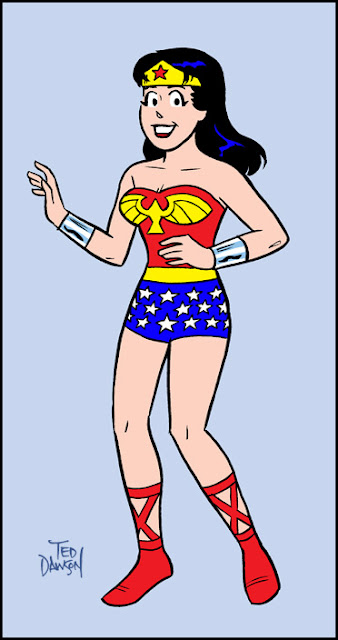 Wonder Woman is one of those characters who has always had enormous potential, but who has never quite achieved it. Is it because she's basically wearing a strapless bathing suit? Is it because male writers and artists don't know what to do with a female superhero? Is she simply a token female superhero? Or maybe Wonder Woman simply provides a buff cheesecake fantasy-fest for male comic book readers. I don't know.

J. Michael Straczynski (Babylon 5, Changeling) will be the writer in charge of "reinventing" Wonder Woman. He's a great writer, and he did an awesome job with Spider-man, pulling me back into reading comics for a while after several years. Maybe he can do something with Wonder Woman. I hope that's the intent, rather than it being a shallow attempt to build up strength for the movie. (I think if They could figure out a way to dump the comics and just do the movies, They would.)

I'm sure I had a point in there somewhere. I reckon I'm just a disgruntled grown-up who misses the comic book spinner racks. When we did my Spooner comic book five or six years ago, I actually called the Sea Monkeys people and the Charles Atlas people so I could put their ads in my comics. And I tried to talk publisher Scott Sava (Dreamland Chronicles) into printing them on cheap newsprint, but he wouldn't. And now I'm digressing. And drawing Archie's Veronica as Wonder Woman. I should probably go roast some hot dogs or something.