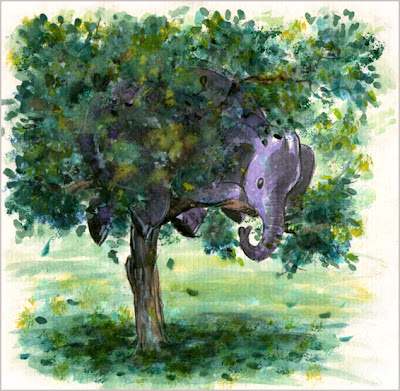 A while back, Paul Giambarba told me that he never used watercolor paper. Paul uses a level of economy with his brush and paints that I don't know if I could ever master, so I think he can get away with painting on restaurant napkins. He was nice enough to send me samples of several different kinds of paper to experiment with when I first began using watercolors.

I made a few drawings based on a story I told my kids one night, and I ended up using a piece of white corrugated cardboard that had been used for shipping or something. I don't know if I'd use it again but it got an effect much different than if I'd have used Arches. And it was smooth! I could market it as Dawson's Imperial Corrugated Watercolor Paper.

Someone suggested, and it might have been Paul, to go to paper sellers and get some samples. Use them to experiment with. I think my problem is that the way I paint, I use way, way too much paint and water. The only thing that will keep my paper from buckling is using 2000 lb. paper, which I haven't been able to find yet. Somehow I get this feeling that Paul is right, and that watercolor paper is over-rated.
Posted by Ted Dawson