I was reading about how J. Michael Straczynski is going to be re-inventing (yet again) Wonder Woman for DC Comics, with Jim Lee redesigning the costume. Frankly, I think the best Wonder Woman we've seen in decades came from Darwin Cooke in The New Frontier. (I thought it was great that Cooke made her taller than Superman.) I get a little tired of Adam Hughes' et alia cheesecake drawings of Wonder Woman.

I thought I'd work up something representing the 1940s Amazonian princess. It's an Unfinished Work-in-Progress, mostly because I always reach a point where I don't know how to finish a painting. I reckon someday I'll take some classes. This was painted in ArtRage2 and I used Francis Gifford as a reference. 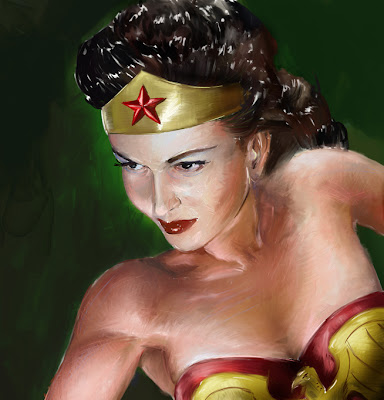 I touched it up a little bit. It had looked like she had a sunburn.
Posted by Ted Dawson