A judge on Wednesday ruled that the family of superman's co-creator, Jerry Siegel, has "successfully recaptured" rights to additional works, including the first two weeks of the daily Superman newspaper comic-strips, as well as portions of early Action Comics and Superman comic-books.

The ruling is based on the court's finding that these were not "works-made-for-hire" under the Copyright Act. This means the Siegels -- repped by Marc Toberoff of Toberoff & Associates -- now control depictions of Superman's origins from the planet Krypton, his parents Jor-El and Lara, Superman as the infant Kal-El, the launching of the infant Superman into space by his parents as Krypton explodes and his landing on Earth in a fiery crash. 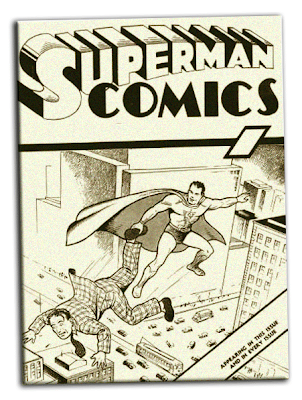 But Warners/DC still owns other elements, including Superman's ability to fly, the term kryptonite, the villain Lex Luthor, Jimmy Olsen and some of Superman's powers.
Sources: Variety and THR.com
This seems to indicate the strength of the claim is based on Siegel and Shuster creating Superman independently several years before they sold the rights to DC. I'm no legal expert, but as a court ruling this could set a legal precedent for other creators.
Could this be applied to older, syndicate-owned newspaper comic strips? Could the Schulz family get the rights to the originally submitted Peanuts strips and even its original cast from United Media? Could Chester Gould's daughter reclaim ownership of Dick Tracy? This may have big implications for corporate-owned strips such as Popeye, The Phantom, Blondie, Dennis the Menace, Buck Rogers, Little Orphan Annie, Flash Gordon and others.
Or it might just mean we won't see any more Superman origin stories.
Posted by Ted Dawson