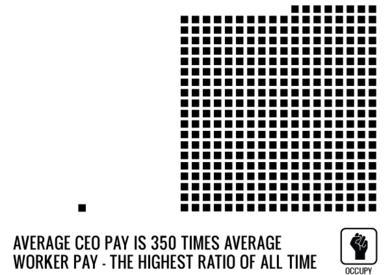 Last weekend, San Francisco, New York, and Washington, D.C. hosted spontaneous "Hackathons" to brainstorm how to use various platforms to help Occupy Wall Street. One of the ideas hatched was Occupy Design, a new website that gives a "visual language" to protesters across the country. Jake Levitas, a designer from San Francisco who's heading up the project, says it's a chance to fight back at media who characterize the movement as directionless.

"These are people who have valid concerns grounded in reality and grounded in data that can be communicated visually," Levitas says. "If we get these signs on CNN instead of the ones that say 'Screw capitalism' on a piece of cardboard," viewers don't see a generic grievance but "exactly how people are being screwed and by how much. It’s a lot harder to argue with statistics than it is with talking points."

The site provides big-think infographics that illustrate data on the wealth gap, symbols for overarching concepts like "justice" and "community," and practical signs to use on the ground like "toilet" and "landfill." Levitas says it's a chance for designers and techies to contribute to the movement, even if they can't make it to a protest.

"There’s all this untapped potential for people who are extremely talented," he says. "It's essentially a way to connect occupiers and designers. Everyone has a different role in this movement."