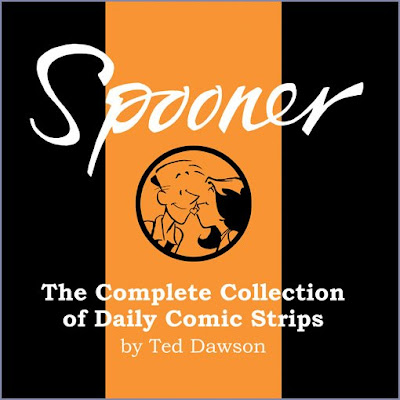 The new Spooner anthology is now available through Lulu Publishing. This 238-page, 8.5" X 8.5" paperback collects all the daily comic strips (sans Sundays) from the first to the last.
I decided to publish this mostly for myself, just so I could have all the comics in one easily-accessible place, but thought I might as well make it available to the public. It sells for $14.95 plus shipping.
Spooner was syndicated by the Los Angeles Times Syndicate shortly before it was bought out by the Tribune Co. About a month before 9/11 I moved Spooner to United Media, and I began self-syndicating the strip a few months after that. It features Spooner and Roxanne, a young married couple learning the ropes of marriage. I can't tell you how many letters I received from couples who accused me of having a hidden camera in their house.
The strip ran in a very modest number of international and domestic newspapers from January 3, 2000 (the day of the last daily Peanuts) to June 15, 2002. Spooner was also published in two comic books and one trade paperback (Spooner: Love is Strange) by Astonish Comics.
Spooner: The Complete Collection of Daily Comic Strips
Posted by Ted Dawson