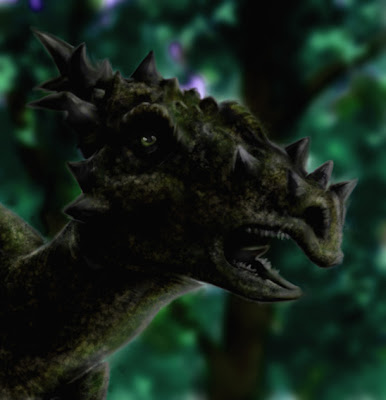 I saw a very cool dinosaur on the cover of the latest National Geographic. Its name is Dracorex hogwartsia. Under the brush of a good illustrator (like on the NG cover) it looks uber-cool and resembles a dragon.

I really wanted to try drawing one. I used a photo of a fossilized skull to work from. I don't really like to make dinosaurs look mean, especially since this one was an herbivore, but when I showed it to my daughter she said it looked cute, so I guess I didn't make it look too ferocious.

I wasn't really happy with how it was turning out, so I started fiddling around with levels and contrast and saturation in Photoshop. With this I achieved a darker, shadowy look that gave it a bit more realism and feeling of foreboding. I'm not sure what foreboding means, but it sounds right.

I'm not sure of the history of the dinosaur's name but it was done in honor of billionaire Harry Potter author J.K. Rowling. I don't think she looks anything like a dinosaur, but...

Dracorex lived about 80 million years ago during the late Cretaceous in South Dakota.
Posted by Ted Dawson