Last week I picked up a Motion LE1600 tablet PC. I thought I'd do a quick review. 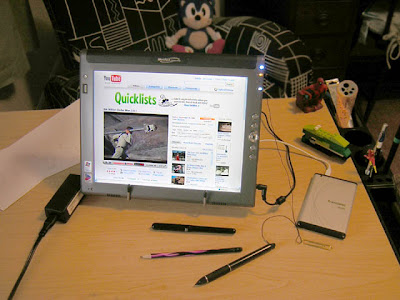 First off, it's a slate style tablet with no keyboard. I have to say that I don't miss it at all. The handwriting recognition software is so well integrated it's amazing. I'm making this post by writing in my usually messy handwriting on the screen. The lack of a keyboard (and optical drive) makes the Motion much lighter than the usual laptop, weighing in at about 3 pounds.

It's very comfortable to sit down and draw with the tablet on my lap. The only issue is the heat, something you can't get away from in a portable computer. A small, noiseless fan helps some. It's so quiet I thought it was broken. In a cool room with a fan on, it's tolerable; otherwise it's too hot. The solution appears to be a new cooling pad called the Thermaltake iXoft, which I'm ordering. 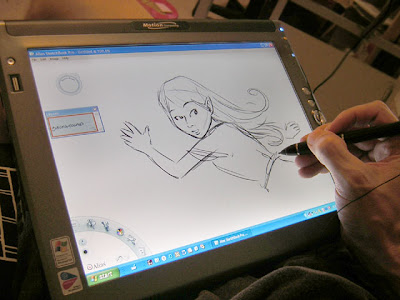 The LE1600 has Wacom technology, with a 12" digitizer screen and pen w/eraser. The pen is a nice thickness and weight, similar to the Graphire 4 pen. It slides inside the tablet unobtrusively and has a tether in case you're prone to losing your pen. This tablet has 256 levels of pressure sensitivity; half as much as the Graphire. More would probably be better, but I don't notice a huge difference.

Drawing in Photoshop is completely unworkable for me. I draw quickly and the lag time between the pen and what happens on the screen is awful. This is a Photoshop issue, one they surprisingly haven't yet dealt with. I downloaded the trial version of Sketchbook Pro 2, which was designed especially for tablets, and it works like a dream. ArtRage also has potential.

The tablet has built-in wireless,which works great upstairs, but gets weak outside (what's the point if you can't sit on the porch and work?) : ) It is Bluetooth enabled.

My overall impression is that everybody will have one of these in the near future. This is what a computer should be! And for illustrators? Anyone who does a lot of digital work should have no qualms considering this tablet. The price is steeper than a regular laptop, but this isn't a regular laptop. Can it replacea desktop, monitor and Wacom tablet? I think so. And it's cheaper than a Cintiq, which is supposed to be awesome, but ya can't carry it around with you. 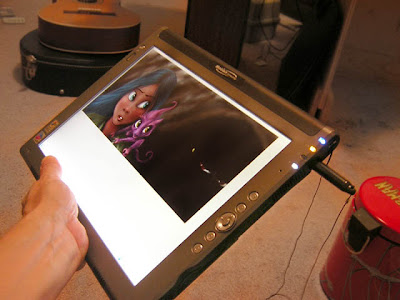 The motion is solidly built and the support seems good. I'm writing this because its hard to find info on the web from an illustrator point of view regarding tablets. There aren't really any stores that stock them so it's near impossible to test them out. If that changed, I'm convinced these would be more widely used by folks other than doctors and contractors.

There are various accessories, but I am using my wife's antique cookbook holder as a stand for the computer when I need one (like to watch The Six Million Dollar Man). It requires an external CD-ROM to load software, unless you buy and download from the web; it's really not as big an issue as I would have thought. The battery lasts for a couple of hours, depending on how you manage the power settings (the black bar across the top is the battery), and an extended battery is available. Two mics for speech recognition. The speakers suck, and that's pretty normal unfortunately.

But the question is, can this be a mobile studio? Yep.