Edit: Well, I fell for it. This trailer was a hoax.


It was obvious that the trailer included footage from Iron Man and The Incredible Hulk, but I didn't think that would be unheard of in a pre-production trailer, one that was leading up to an Avengers movie. But I didn't catch the clips from Hellboy and whatever else that Bleeding Fool caught. What fooled me was the "WWII Captain America." I have no idea where that footage came from.


I first saw this on YouTube as a "clean" trailer and suspected it was a fake. The next day, it was gone and what remained was the "Comicon" trailer. Somebody did a good job in AfterEffects to make it look like a camcorder capture in a screening room. That was convincing for me, even if the trailer itself wasn't. Got me! I'm a sucker.

A sneak peek of the forthcoming Captain America movie was shown at Comicon in San Diego. It'll star Chris Evans, who played the Human Torch in the Fantastic Four movies. 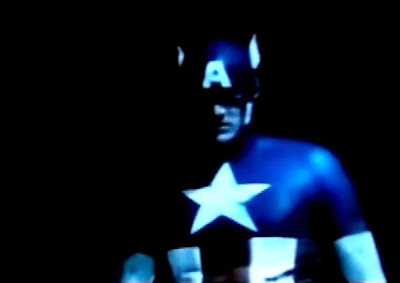 The comicon trailer looked promising except for one little thing: 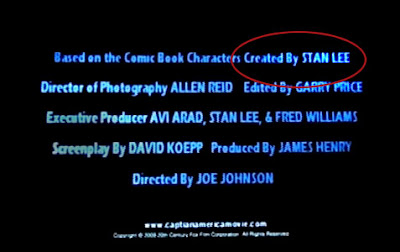 By no stretch of the imagination is Stan Lee associated with the creation of Captain America.

I'm certain Marvel currently has an entire team of lawyers devoted to keeping Jack Kirby's heirs from having the same success as those of Jerry Siegel and Joe Schuster. They're just prolonging the inevitable.
Posted by Ted Dawson