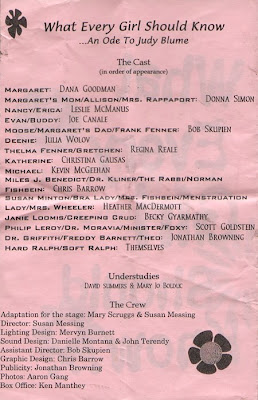 While rummaging through some of my stuff, I happened to find the above program from a play I attended in Chicago 10 years ago called, "What Every Girl Should Know ... An Ode to Judy Blume." I guess you could equate it with a dude going to a chick flick. I really wanted to go because I grew up reading every Judy Blume book in our local library and I absolutely love Judy Blume! At the time the play was controversial because the theatre had some sort of problem using Judy Blume's works in the play and the show could not go on without permission from Judy Blume.

We saw the play at The Annoyance Theatre in Chicago. It's a black box theatre that only seats 60 or so people.
As soon as the show was over on the night my friends and I attended the play, a crew member came out on stage and said, "We'd like to thank you for coming to the show and we'd also like to thank a special audience member tonight .... Judy Blume!" The audience went wild. There I sat in this small theatre watching this play about Judy Blume's work and she was in the audience the whole time. Though I didn't get to say hi to her or shake her hand or anything, I was in the same room as Judy Blume, one of my heroes. It was an amazing night and ten years later, I haven't forgotten it.

Judy Blume is currently on a blog tour and our friend, Kelly Herold was able to do an interview with Judy over on Kelly's blog, Big A, little a. Check it out and follow Judy Blume on her blog tour!
Posted by Stacy Curtis